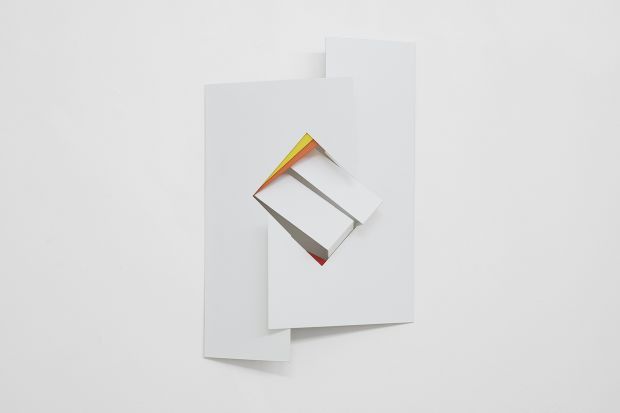 The exhibition includes paintings, sculptures, reliefs and works on paper by Ania Borzobohaty, Jerzy Budziszewski and Karel Stengel - three artists who have been the focus of interest and program of Le Guern Gallery for several years.

Abstraction has fascinated visual artists for over a hundred years and its potential, when confronted with figuration, seems unlimited. This translates into ever new forms of works using the language of non-representational art, devoid of direct references to widely understood reality. The road to abstraction usually leads through the meanders of the artists' struggle with figurative art. It is the result of a long and careful search, to which artists must mature if they decide to move away from imitating nature. The method of using a constellation of colors and shapes, often radically reduced to simple gestures or decisions, is only seemingly easy. In fact, creating this kind of art requires conceptual and materialized inquiry - on the level of both theory and practice - confronting one's own imagination and mimetic burdens.

Ania Borzobohaty, Jerzy Budziszewski and Karl Stengel - artists of different generations and artistic backgrounds, shaped by different cultures and traditions - have consistently devoted their interests to abstract art. Although their art is diametrically opposed to each other, Borzobohaty, Budziszewski and Stengel have much in common. First and foremost these are the experiences of migration, and the artists' inherent belonging to several places and cultural contexts, as well as their tireless exploration of a distinct language of abstraction. The search for cultural identity and their own place in the world goes hand in hand with an attempt to find individual attitudes in the field of art, which all three successfully demonstrate in their work. Abstraction in their edition seems to be freedom, unfettered by a concrete time and space, and therefore somewhat devoid of references and definitions to current art and cultural heritage. As a result, their work, which uses universal and thus transcending various divisions codes of abstraction, can hardly be placed in a concrete place and time. On one hand, it belongs to the international vocabulary of the 20th and 21st century art, on the other - it can be perceived as completely separate, uprooted from both orders and contexts of artistic geography.

Ania Borzobohaty was born in 1972 in Paris and lives and works in Krakow, Paris and Caracas. After graduating from the Sorbonne in Paris, she studied at the University of Fine Arts in Granada and at the Academy of Fine Arts in Warsaw. She creates sculptures and three-dimensional wall compositions with geometric forms and strong colors, in which she uses the effects of optical illusion. Borzobohata's works are often designed for specific places, conceived as sculptures in public space. The artist's compositions are a play on the viewer's visual perception and at the same time on the limits of spatial imagination.

Jerzy Budziszewski (Joshua Ben-Or) was born in 1950 in Zawisty NadbuĹĽne in Podlasie, died in Paris in 2006. He created paintings, sculptures, reliefs and graphic works using geometric forms. He was also interested in photography. After studying at the Warsaw Academy of Fine Arts he participated in the artistic life of the 1970s and 1980s in Poland. From the beginning of his career Budziszewski was fascinated by Constructivism, particularly the work of Henryk StaĹĽewski, as well as the work of Kazimierz Malewicz, which also influenced his mature work. After the end of the 1980s, he emigrated to Israel and then, in the 1990s, to New York. In the USA, Israel and other countries he presented his works at individual and group exhibitions, at the same time maintaining contact with the Polish art scene.

Karl Stengel was born in 1925 in Novi Sad (now Serbia). He died in 2017 in Tuscany. He created paintings and works on paper by combining painting and drawing techniques. He studied at the Academy of Arts and Crafts in Budapest and later at the Akademie der Bildenden KĂĽnste in Munich. He lived and worked in Germany for most of his adult life, and towards the end, also in Italy. From the late 1970s, he created mainly abstractions using strong colors and expressive painting gestures. He often placed a silhouette of a human figure in the center of his compositions. Musical inspirations can be seen in Stengel's works, especially his works on paper can be read as scores.