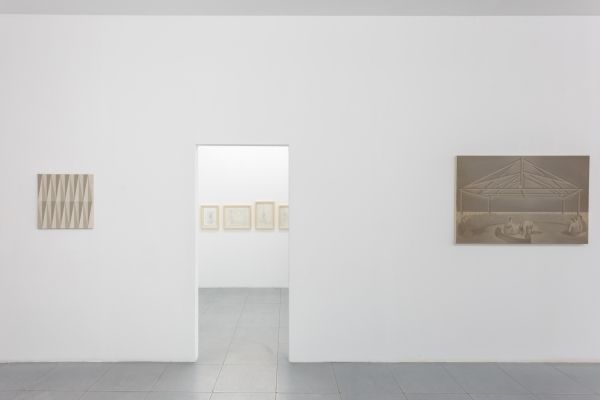 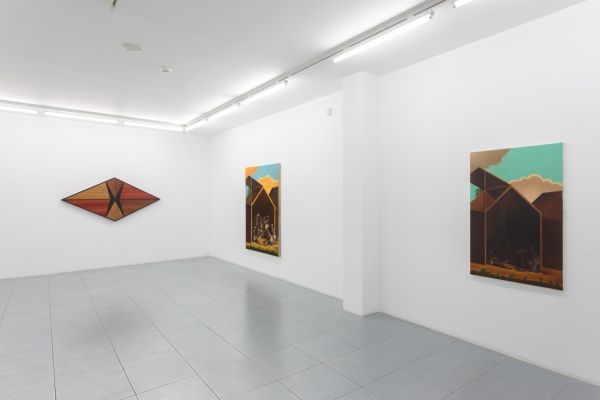 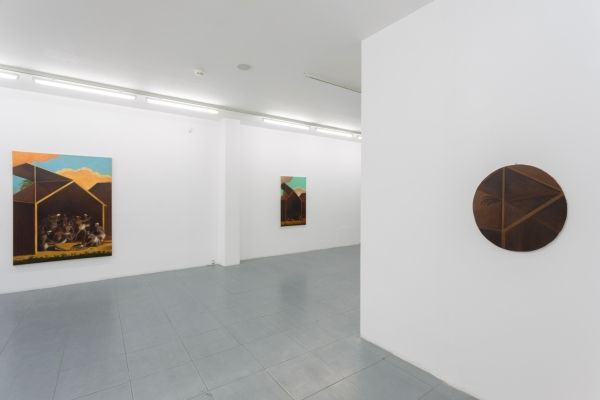 Robert Maciejukâ€™s solo exhibition at Le Guern Gallery takes its point of departure in an illustration featured in the book A New Universal History Of The Religious Rites, Ceremonies And Customs Of The Whole World Or A Complete And Impartial View Of All The Religions, written by doctor William Hurd in 1790. Captioned â€˜Religious ceremonies practiced by the people of Guineaâ€™, the copperplate shows a baptism or some other ceremony related to a newborn child. What the artist found particularly interesting in it is a tension between the architecture in which the scene is set and a group of naked people in a â€˜choreographicâ€™ arrangement â€“ a mysterious â€˜happeningâ€™. The hutâ€™s geometric structure, formally rigorous, offers shelter to people while serving as a scenographic â€˜frameâ€™ for a ritual. The raised roof lets light in. This kind of contrast between logical geometry and matters eluding a rational understanding of the world was also present in Maciejukâ€™s other paintings, but for the first it could be noticed so clearly in an 18th-century engraving on the basis of which the artist has created new works.

The exhibition is enriched by a series of paintings that are sort of stylistic exercises. Rendered using the formal language of cubism, one of the most radical analyses of human vision, they offer a reflection on the tools and methods of cognition, asking whether, and how, it is possible to examine spiritual phenomena. This reference to an avant-garde artistic trend from the beginning of the 20th century provokes other questions: is it right to explore certain areas using instruments that are not entirely adequate to the subject of interest? Is such exploration doomed to fail? And finally, can an artistic work constitute an â€˜exemplification of errorâ€™, a consequence of a â€˜wrong methodâ€™?

A third group of works, titled jointly Geometry in Service, investigates the use of geometry in ecclesiastic utensils and everyday objects. It delineates the maximum area in which geometry functions â€“ from things that serve liturgy and church life to banal objects that we encounter on a daily basis. These works show how geometry as mathematics and order can â€˜organiseâ€™ human life and how, consciously or not, it helps in matters of supreme importance to many people.

For Maciejuk, a preoccupation with insolvable conflicts, with questions to which there are no clear-cut answers, is a pretext for painting. Similarly, in the new paintings and objects featured in Ceremonies, the worlds of science and religion interpenetrate. There is a â€˜conflictâ€™ in them between the rational and the spiritual. The titular â€˜ceremonyâ€™ should also be construed as a celebration of Maciejukâ€™s painting practice, an artist â€˜immersed in techniqueâ€™, for whom the pictureâ€™s material and technological layer is a kind of language, a medium. This layer also â€˜speaksâ€™, as a â€˜textâ€™ and a means of conveying meanings.

Exhibition within the framework of the Warsaw Gallery Weekend www.warsawgalleryweekend.pl