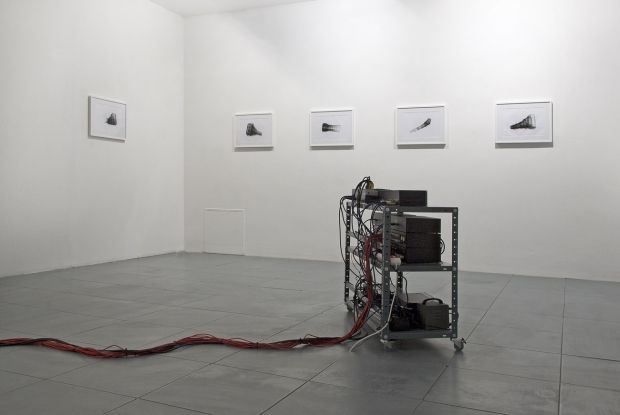 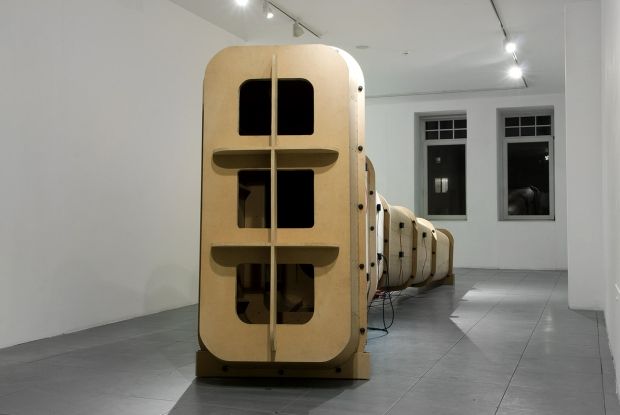 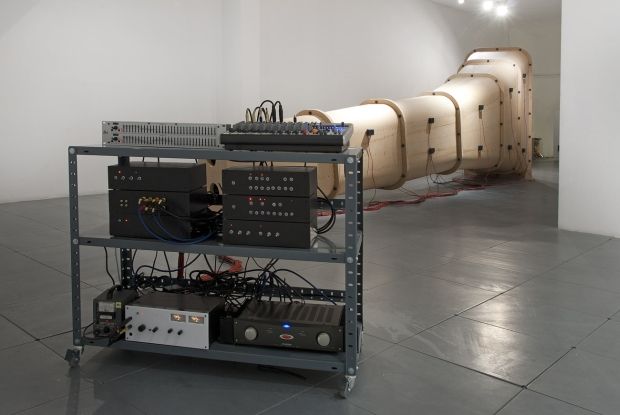 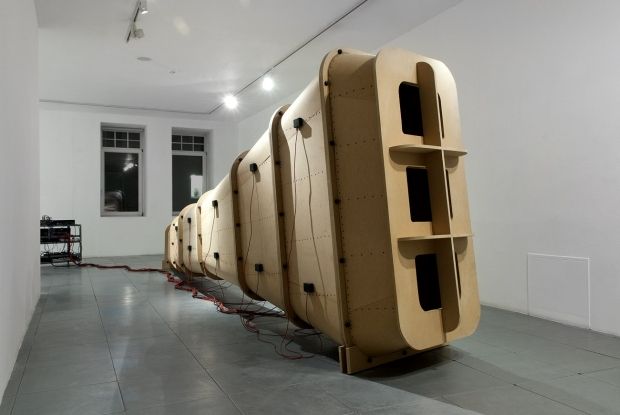 Przemysław Jasielski’s project is of a ‘technological being’ – a creature that reacts to human presence by making sounds and vibrations. Touched twice in the same spot, it will react differently each time. Leviathan follows its own logic. Unlike man-made machines, its behaviour is not fixed and depends on its will. Our mobile phones, computers, music instruments or manufacturing machines operate in a pre-defined manner (unless they are broken) and are useful: we know what to expect from them in response to our actions. Leviathan confronts the viewer with the unpredictability of a machine, its ability of independent reaction. It remains inassimilable and, in its own way, passive. The sovereign nature of this being challenges our intuitive sense that man enjoys a privileged position over his creations. The project’s title alludes to Thomas Hobbes’s classic book and its political notion of an absolute sovereign: an entity called into existence by man but equipped with intellectual autonomy, its own reason. In Przemysław Jasielski’s project, the paradigm of the privileged position of human reason is similarly overstepped. Leviathan forces a breach in man’s superior position with regard to technology and the utilitarian functioning of the machine. The latter receives here its own, subjective identity.

Jasielski takes the philosophy of artificial life as his point of departure. Studies conducted from this perspective examine life in its various forms, not limited to biological life, rejecting ‘carbon chauvinism’ – the widespread experiential notion that life forms based on biochemistries other than carbon are impossible, unreal or simulated. Leviathan is precisely such an alternative model of life. Unlike self-executing immaterial entities (software programs, computer viruses) or the products of cybernetic engineering (robots), Jasielski’s project, while operated by computer software, possesses a kind of artificial personality, its own emotionality, which allows it to generate more nuanced, more individualistic reactions, reminiscent of biological forms of life.

Przemysław Jasielski works in a genre known as science art, which draws extensively on the achievements of modern science and technology. His projects are informed by cutting-edge developments in engineering and mechanics, acoustics and sound engineering, programming, philosophy of science, and other fields of knowledge. Unlike in science, however, they have neither a scientific application – such as to guide research, advance study or aid further experimentation – nor a commercial one, where they would be used as life improvements, to provide entertainment, or as symbols of social status. Jasielski is interested in the world of machines in its utopian, anti-utilitarian dimension.

Przemysław Jasielski (born 1970) is an author of installations, objects, drawings and photographs. He has had solo shows at Tokyo Wonder Site in Japan, 2013 (Paper Bridge Over Stone Water installation), Skolska 28 Gallery in Prague, 2011 (Opportunity), Gyeonggi Creation Center in South Korea, 2010 (Global Warming Control Unit), Montalvo Arts Center in California, 2004 (Earthquake Control Unit), Optica Centre for Contemporary Art in Montreal, 2003 (Earth Rotation Speed Control Unit), and other venues. He has been featured in group exhibitions at the CCA Ujazdowski Castle in Warsaw, National Museum in Cracow, Bunkier Sztuki in Cracow, Malta Festival in Poznań, and other shows in Poland and Germany. Recipient of scholarships awarded by the Minister of Culture and National Heritage, fellow of the CEC Artslinks programme and art residencies in Asia and the United States.

Leviathan is the artist’s second exhibition at Le Guern Gallery.

Project realised in the course of a scholarship awarded by the Minister of Culture and National Heritage.