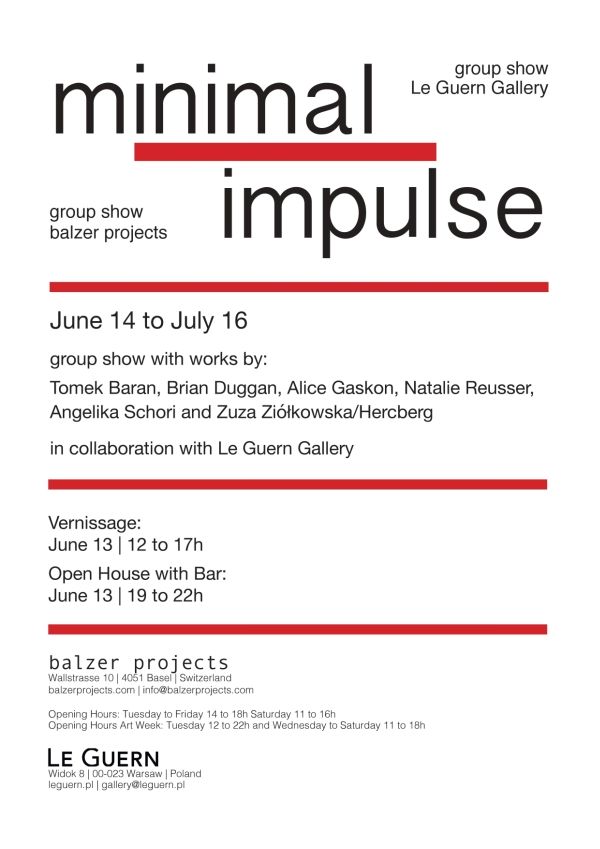 The exhibition presents recent abstract and conceptual works by artists associated with Le Guern Gallery in Warsaw and Balzer Projects. In these â€“ seemingly different - works by Tomek Baran, Brian Duggan, Alice Gaskon, Natalie Reusser, Angelika Schori and Zuza ZiĂłĹ‚kowska/Hercberg can be found a tension between minimal controlled form and spontaneous gesture or chance. Differing in morphology and poetics, the works share the aspect of minimal impulse expressed in painterly matter, subordinated to the artist's decisions and technique, echoing a hardly definable moment of constructing form based on creative imagination.

Tomek Baran (*1985) is a painter. In 2010 he graduated with an MA in painting from the Cracow Academy of Fine Arts. He debuted in 2008 at the Campaigne for Revaluating Abstraction at F.A.I.T. Gallery in Cracow. The oeuvre of Tomek Baran is a narrative about relationships between the image, the setting and the spectator in context of concepts such as image surface, space and materiality. He has shown his solo projects at BWA Olsztyn in 2016; Le Guern Gallery in 2015 and 2012, Bunkier Sztuki in KarkĂłw in 2012, AS Gallery and Delikatesy Gallery in KrakĂłw in 2010. His works have been also shown at many group exhibitions in Poland and abroad such as Interior at Le Guern Gallery 2016l Contemporary Art from Poland, European Central Bank, Frankfurt am Main 2016; XVI International Painting Triennial 'Nomadic Images', Vilnius 2016; A pudding that endless screw agglomerates, Polnisches Institut, Berlin 2016; Artists from Krakow: The Generation 1980-1990, MOCAK Museum of Contemporary Art., KrakĂłw 2015; Czech-Polish Stars at Kubik Gallery in Litomysl, Czech Republic 2015; Mere Formality, Galeria Labirynt, Lublin 2015; For Me, Abstraction is Real, Boccanera Gallery, Trento 2015; As You Can See: Polish Art Today, Museum of Modern Art, Warsaw 2014In 2010 he was participant in residency program in Montrouge. In 2012 Baran received the award of recognition from Strabag ArtAward and was artist-in-residence in Vienna.

Brian Duggan has long been concerned with questions concerning labor and leisure, history and tradition, politics and popular entertainment. Equally striking and consistent is the feature of careful and considered engagement with the audience, who is invited into the project, sometimes without even realizing it. Most recently he has taken a particular interest in the way in which civilization deals with radioactivity, approaching with his artworks the duality of invisibility and imminent lethal threat. In 2016, Brian Duggan presented a solo-project Ryou-Un Maru at the Project Art Centre in Dublin, curated by Tessa Giblin (Publication) and Activating Pangea: The Voyage at MART in Los Angeles. His work is included in the permanent collections of the Hugh Lane Gallery, the OPW national collection and the Irish Museum of Modern Art. He has undertaken residencies in ISCP New York, IMMA, CCI Paris, Braziers International, Project 304 Bangkok and ChangMai, Thailand. He was the co-Founder and co-Curator and co-Director of the multi platform Pallas Projects in Dublin from 1996 to 2009. Brian Duggan, (*1971) lives and works in Dublin.

Balzer Projects and Le Guern Gallery both represent Polish artist Alice Gaskon (*1985, lives and works in New York and Warsaw). Her works oscillate with ease between different types of media. Ever constant reduction is paired with spaces of transition and indecision. by processing abstraction and representation, form and formlessness, Gaskon evokes emotions that are stinging as they are captivating. In her latest piece of work she focuses on the phenomenon of artificially imposed, human-made division; examining consequences, caused by the initially frivolous decisions that lead to such divisions in the first place. Alice Gaskon received her Masters of Fine Arts from the Department of Painting (Specialization: murals, sculpture, animation), at the Academy of Fine Arts in Warsaw, Poland. Gaskon has been exhibited widely in numerous solo and group shows in Switzerland and Poland. In addition to multiple awards and scholarships, she has shown with Gallery Le Guern in multiple prestigious international art fairs, including Artissima, Frieze and Viennafair. Gaskon had two solo shows with balzer projects, in 2015 and 2016. She lives and works in New York and Warsaw.

Swiss artist Natalie Reusser (*1988) understands her work as an exploration into specific fabrics and high-tech materials. That way, she investigates the ever increasing dominance of for example Carbon, glass fiber and Kevlar, her current materials of choice. Mechanical treatment, as well as manual manipulation result in surprising effects that allow for a dialogue between artist and material to emerge: a dialogue, whose outcome can be understood as proof of an intense interaction. Natalie Reusser lives and works in Bern. In 2014, she received a Masters degree in Contemporary Art Practice from the Academy of Arts in Bern. Since her 2015 solo gallery project in Basel, she has participated in numerous groups in Swiss and international galleries and institutions. In the Autumn of 2017, she will present her second solo show at balzer projects.

Angelika Schori (*1981, lives and works in Basel) questions artâ€™s production and its presentation process by employing the most traditional of all media â€“ painting. Doing so, she investigates unexpected terrains; she challenges her audience by leaving comfort zones and breaking with artistic anticipation. The use of heat on metal and the quiet and discrete reflection of color on the wall, firmly ground Schoriâ€™s new work in her aesthetic premise: making the invisible visible, removing the painter from the painting process; challenging the audience and the exhibition space to visualize the potential of a minimalist intervention into painting. Angelika Schori received her Bachelor of Fine Arts degree in 2010 from the FHNW/HGK (School of Fine Arts) in Basel, where she also completed her MFA in 2014, both with Prof. RenĂ©e Levi. She has exhibited extensively in Switzerland, Germany France and the United States in group and solo shows. In the Sprong 2017,blazer projects presented her most recent solo show, entitled Six to Seven (geometric colors) She lives and works in Basel.

Zuza ZiĂłĹ‚kowska/Hercberg (*1981) is a painter, author of installations and performative actions. She has graduated with honors from the Academy of Fine Arts in Warsaw, the Faculty of Painting, prof Leon Tarasewicz and Ph.D. Pawel Susid Painting Studio. Currently working on her PhD at the Warsaw Academy of Fine Arts at the Media Art Department, ZiĂłĹ‚kowska/Hercberg is predominantly interested in the subjects of memory and body, as well as issues related to a broad sense of identity and belonging to a place. ZiĂłĹ‚kowska/Hercberg has participated in numerous exhibitions. These exhibitions, among others, include: After the rally at Studio Gallery in Warsaw 2016; Unknown Variable (solo show) at Le Guern Gallery in Warsaw 2016; Czech-Polish Stars at Kubik Gallery in Litomysl, Czech Republic 2015; Order out of Chaos at Le Guern Gallery 2015; Colours for the Planet at UNESCO in Paris 2015; The 42nd Painting Biennale Bielska JesieĹ„ 2015, Bielska BWA Gallery, Bielsko - BiaĹ‚a; Proposed Period of Time at Corridor Gallery in UĹĽohrod, Ukraine 2014; Progress and Hygiene, ZachÄ™ta â€“ National Gallery of Art in Warsaw 2014; Everywhere is Everywhere (solo show) at Galeria BiaĹ‚a in Lublin 2013).