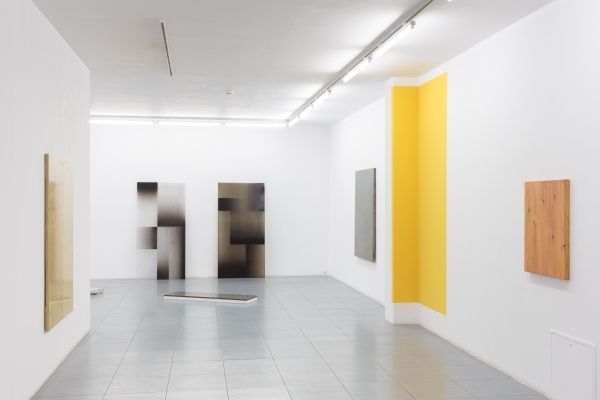 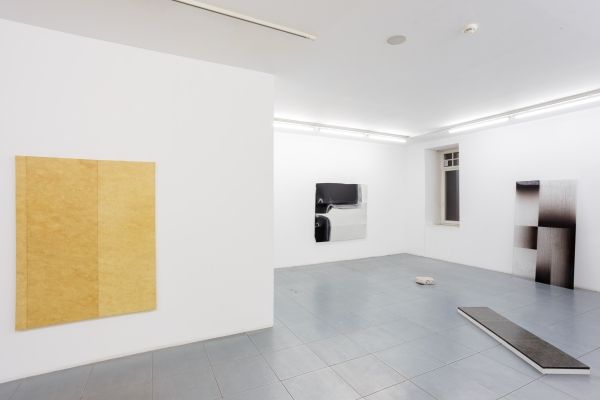 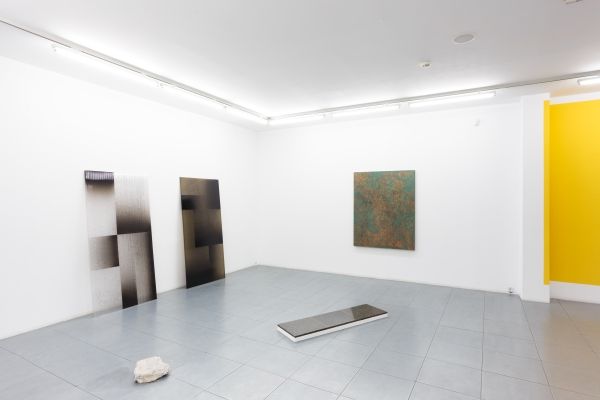 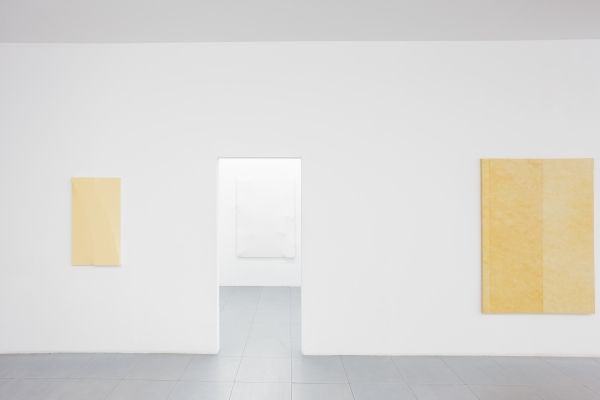 The exhibit of works by Tomek Baran and Peter Grzybowki focuses on the medium of painting: its functions, the richness of ornamental form, and the untruth of the material. The key concept of the exhibition is the â€śissue of wallâ€ť reflected in the works of both artists: the integral connection and the disconnect between a painting and its base. The interlinked paintings of both artists escape the framework of the noble medium and also operate as objects. The motifs of wall and canvas painting intertwine, joining the perennial discourse on the limits of painting.

The exhibition presents Tomek Baranâ€™s recent paintings of the series Expirations. The artist has been also commissioned to create a wall painting at the exhibition: a counterpoint to spatial works that use Constructivist canvas, built from convex and concave forms. Baranâ€™s meditations on the links between a painting, its environment, and its audience in light of such issues as the surface of a painting, space, and materiality, have much in common with paintings of Peter Grzybowski (who died in 2013). The 1990s works presented at the exhibition follow the tradition of painting which imitates the appearance of rock, wood or other material: faux painting. The style had its revival in North America in the 1980s and 1990s, when Grzybowski painted illusionist compositions on the walls of private apartments to make a living as a performer in New York. In addition to commissioned works, the artist created a large number of works on canvas in the same style. The uniqueness of the trompe lâ€™oeil was meant to customise and decorate New Yorkersâ€™ home interiors and make them original.

Tomek Baran (ur. 1985) is a painter. In 2010 he graduated with an MA in painting from the KrakĂłw Academy of Fine Arts. He debuted in 2008 at the Campaigne for Revaluating Abstraction at F.A.I.T. Gallery in KrakĂłw. He has shown his solo projects at Bunkier Sztuki, AS Gallery and Delikatesy Gallery in KrakĂłw, MDS Gallery in Wroclaw. In 2016 his big solo show entitled Heavy Metal was presented at BWA Gallery in Olsztyn. His works have been also shown at many group exhibitions in Poland and abroad: XVI International Painting Triennale Nomadic Images, Vilnius 2016; A pudding that endless screw agglomerates, Polish Institute, Berlin 2016; Artists from KrakĂłw. Generation 1980â€“1990, MOCAK, KrakĂłw, 2015; ÄŚesko - polskĂ© hvÄ›zdy, Miroslav Kubik Gallery, LitomyĹ›l, 2015; Mere Formality, Labirynt Gallery, Lublin 2015; For Me, Abstraction is Real, Boccanera Gallery, Trento 2015; Polish Art Today, Museum of Modern Art, Warsaw 2014.

Peter Grzybowski (born 1954, died 2013) was a performer, multimedia artist and painter. He studied at the Academy of Fine Arts in KrakĂłw, where he earned a degree from the Department of Painting in 1982. From 1985, Grzybowski lived and worked in New York. His first performances took place from 1981, including both one-man appearances and work with collectives: AWACS (1982â€“87) and KONGER (1984â€“1986). Until 1996, he mainly exhibited painterly works in the US, Poland and other European countries. He was a member of the Association Fort Sztuki and IAPAO; co-founder of the Foundation for the Promotion of Performance Art â€śKesherâ€ť in KrakĂłw; curator of Kesher performance events and festivals in the US and Poland. His work commented on and criticised the surrounding world, its phenomena and changes, involving destruction and deconstruction of objects. For expressive effect, Grzybowski used materials and props such as glass, blood, fat, sports equipment, and tools. In his final years, he created multimedia performances using computers, digital video, sound, UV light, as well as interactive CDs. He took part in many international performance events and festivals. His paintings are found in many collections and in institutions including the John Hechinger Collection, the Norton Center for the Arts, the Robert Rothschild Collection, the Michael Rakosi Collection, the Raymond and Arlene Zimmerman Collection, Galeria Wymiany and the National Museum in KrakĂłw.